This work serves as a thorough, yet simple-to-read, reference on various aspects of cloud computing security. The text opens with an introduction to the general concepts of cloud computing necessary to build a basic understanding of the cloud, followed by a discussion of aspects of security. The work then examines how cloud security differs from conventional information security, and reviews cloud-specific classes of threats and attacks. A range of varying threats in cloud computing are covered, from threats of data loss and data breaches, to threats to availability and threats posed by malicious insiders. The text discusses cloud security attacks on different levels, including attacks on the hypervisor, and on the confidentiality of data. Newer attacks, such as side-channel attacks and resource-freeing attacks, are also described. The work concludes with a set of general security recommendations for the cloud. 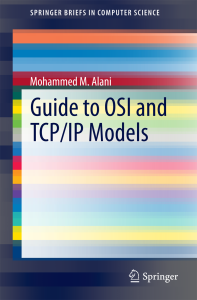 This work provides a guide to the configuration of Cisco routers, from tasks for beginners to advanced operations. A collection of detailed “how-to” instructions are presented, which will be of use to all professionals and students who engage with Cisco routers in the field or in the lab. The guide starts with the simple step-by-step task of connecting the router and performing basic configuration, before building up to complex and sensitive operations such as router IOS upgrade and Site-to-Site VPNs.